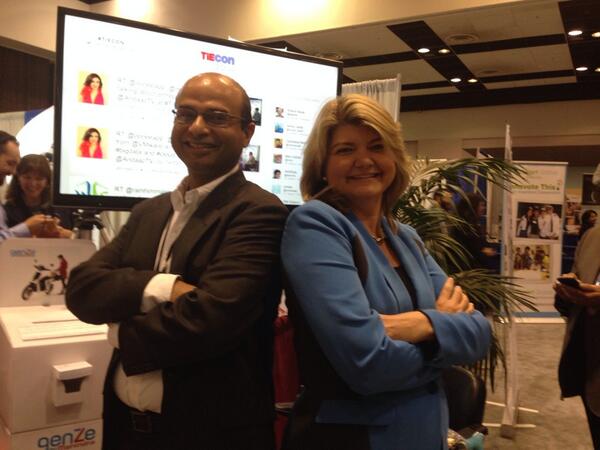 It’s my pleasure to welcome Sandy Carter, GM of Developer Ecosystem and Startups at IBM as the keynote speaker in Trending Tech track of TiEcon 2016. The topic of her keynote is “Disruptive Technologies That You Should Be Investing In Today“.

Sandy is very supportive of the entrepreneurs, startups and the ecosystem. She is really excited to be part of TiEcon 2016 and here is what she had to say:

“I’m excited to be back at TiEcon this year for another great opportunity to meet with entrepreneurs who dare to dream, change and inspire,” said Sandy Carter, General Manager of Cloud Ecosystem and Developers at IBM.  “The future belongs to entrepreneurs, and TiEcon provides a powerful stage for innovators from around the world to be recognized while also learning from experts on the latest cloud-based tools and disruptive technologies that can take their business to the next level.”

This is Sandy’s third year at TiEcon in a row. Many of you may have witnessed her presence at TiEcon stage, TiE TV Lounge and social media during last two TiEcon.

Sandy first joined TiEcon in 2014 as keynote speaker in the IoT track. In addition to the keynote, her presence was felt throughout the TiEcon – TiE TV Lounge, TiE 50 awards and social media. In fact, she gave me tough competition in becoming a leader on twitter leaderboard !!! 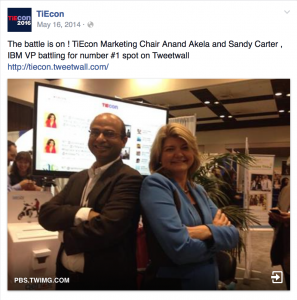 She did not only participate in various activities during the event , but, she also did an amazing job reporting the highlights of the TiEcon 2014.

She joined us again in TiEcon 2015 as keynote speaker in Cloud and security track. She discussed five game-changing ways cloud innovations help you transform your business as part of her keynote. Her impact was, once again, felt not only on the stage, but, also at TiE TV lounge, TiE50 awards, social media etc. In TiEcon 2015, she played another interesting role of interviewing entrepreneurs at TiE TV Lounge. 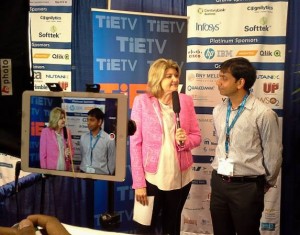 It’s really great to have Sandy join us at upcoming TiEcon on May 6-7, 2016 at Santa Clara Convention center. Having heard her at other events after TiEcon 2015 and read her recent blogs, I think she is an excellent choice for keynote in the trending technology track this year.

Looking forward to her session and may be battling again for twitter leadership wall during TiEcon!!!