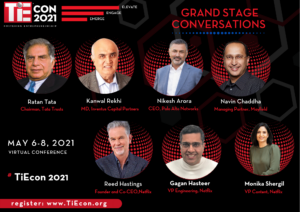 Come join us to listen to the stellar line up of grand stage speakers:

An introduction to the industry titans speaking at TiEcon 2021 below:

Ratan N. Tata was the Chairman of Tata Sons, the holding company of the Tata Group, from 1991 till his retirement on December 28, 2012. Thereafter, he has been conferred the honorary title of Chairman Emeritus of Tata Sons, Tata Industries, Tata Motors, Tata Steel and Tata Chemicals.

Mr. Tata was the Chairman of the major Tata companies and during his tenure the group’s revenues grew manifold, totaling over $ 100 billion in 2011-12.

Mr. Tata serves on the international advisory boards of Mitsubishi Corporation, JP Morgan Chase and Rolls-Royce. He is the Chairman of the Tata Trusts which are amongst India’s oldest, non-sectarian philanthropic organizations that work in several areas of community development. He is the Chairman of the Council of Management of the Tata Institute of Fundamental Research and also serves on the board of trustees of Cornell University and the University of Southern California.

Mr. Tata joined the Tata Group in 1962. After serving in various companies, he was appointed Director-in-Charge of the National Radio & Electronics Company Limited in 1971. In 1981 he was named Chairman of Tata Industries, the group’s other holding company, where he was responsible for transforming it into a group strategy think-tank, and a promoter of new ventures in high technology businesses.

Mr. Tata received a B.Arch. degree from Cornell in 1962. He completed the Advanced Management Program at Harvard Business School in 1975.

The Government of India honored Mr. Tata with its second-highest civilian award, the Padma Vibhushan, in 2008.

Reed Hastings co-founded Netflix in 1997. In 1991, Reed founded Pure Software, which made tools for software developers. After a 1995 IPO, and several acquisitions, Pure was acquired by Rational Software in 1997. Reed is an active educational philanthropist and served on the California State Board of Education from 2000 to 2004. He is currently on the board of several educational organizations including KIPP and Pahara. Reed is also a board member of The City Fund. Reed received a BA from Bowdoin College in 1983, and an MSCS in Artificial Intelligence from Stanford University in 1988. Between Bowdoin and Stanford, Reed served in the Peace Corps as a high school math teacher in Swaziland.

Navin Chaddha is Managing Partner at Mayfield Fund, a top-tier venture capital firm with $2.5 billion under management. His track record of successfully investing in over 50 early-stage companies leading to 17 IPOs and 24 acquisitions, has resulted in his recognition on the Forbes Midas List of Top 100 Investors for twelve years, including as Top 5 in 2020. His investments have created over $60 billion in equity value and over 40,000 jobs. Navin has been involved in some notable IPOs of companies including Poshmark, Lyft, SolarCity, Matrimony.com, Akamai and acquisitions in the last year of CloudGenix by Palo Alto Networks, CloudSimple by Google, Nuvia by Qualcomm, Portworx by Pure Storage, and Volterra by F5 Networks. He is a serial entrepreneur turned venture capitalist who co-founded three successful companies, including VXtreme, a streaming media platform, acquired by Microsoft to become Windows Media. He is an active philanthropist who supports education, diversity, equity, inclusion, and food scarcity groups.  He holds an MS degree in electrical engineering from Stanford University and a B. Tech. degree in electrical engineering from IIT Delhi, where he was honored with the distinguished IIT Alumni Award.

Nikesh Arora joined as chairman and CEO of Palo Alto Networks in June 2018. Before joining Palo Alto Networks, Nikesh served as president and chief operating officer of SoftBank Group Corp. Prior to that, he held a number of positions at Google, Inc. during a 10-year span, including senior vice president and chief business officer, president of global sales operations and business development, and president of Europe, the Middle East and Africa. Prior to joining Google, Nikesh held the role of chief marketing officer for the T-Mobile International Division of Deutsche Telekom AG. He was chief executive officer and founder of T-Motion PLC, which merged with T-Mobile International in 2002.

Nikesh serves on the board of Compagnie Financière Richemont S.A., a public Switzerland-based luxury goods holding company, and Tipping Point, a non-profit organization that fights poverty in the Bay Area. Previously, he served on the boards of SoftBank Group Corp., Sprint Corp., Colgate-Palmolive Inc. and Yahoo! Japan, among others. He holds an M.S. in Business Administration from Northeastern University, an M.S. in finance from Boston College and a B. Tech. in electrical engineering from the Institute of Technology at Banaras Hindu University.

Kanwal was the first Silicon Valley Indo-American Founder & CEO to take a venture-backed company public on the NASDAQ. He then became high profile super-angel while co-founding and leading TiE (The Indus Entrepreneurs) into the largest global mentoring network for Indian entrepreneurs. Kanwal co-founded Inventus in 2007 to institutionalize his high-conviction early stage approach to help Founders build category defining companies.

Kanwal earned a BSEE from IIT-Bombay and a MSEE and Honorary Doctorates in both Business and Engineering from Michigan Tech.

He has also advised the Indian Prime Minister and his government in laying the foundation for the country’s IT expansion. With Inventus, the new India-US venture fund, Kanwal works closely to accomplish great results with entrepreneurs in Silicon Valley and India.

Kanwal was awarded the Entrepreneur of the Year in 1987 by the Arthur-Young/Venture magazine. He has been a recipient of a doctorate degree in Business and Engineering and was appointed to the Board of Advisors to the President of Michigan Tech.

Get more information about the conference at TiEcon 2021

The Indus Entrepreneurs (TiE) is the largest global not-for-profit organization.  Founded in 1992, TiE’s chapters organize 100s of events and programs throughout the year- to educate, inspire, mentor, and fund entrepreneurs. The mission of TiE is to foster entrepreneurship globally through its five pillars: mentoring, networking, education, funding, and incubation. By assisting entrepreneurs, we believe we can empower individuals, create wealth in communities and positively impact the human experience.